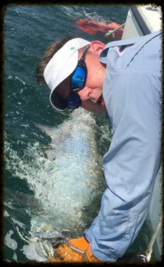 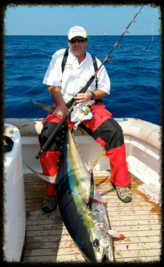 Having been raised in Port Aransas, TX (formerly Tarpon, TX), Hunter Neblett has fished since an early age.  Today, his angling adventures have taken him to all corners of the globe including the Great Barrier Reef, the Andaman Sea, various ports in Central America and the Galapagos Islands.  Hunter’s devotion to tarpon research comes from many sources, including his personal link to the once historic tarpon fishery in Port Aransas, his involvement in recent tagging efforts and his many days spent tarpon fishing on his own boat Threadfin.  Hunter and his team members have successfully participated in numerous tournaments over the years, including:

Scott Alford grew up on the coastal bays of Texas, hunting, fishing and racing Olympic class sailboats.  As his interest in tarpon fishing grew, Scott became instrumental in bringing satellite tagging of tarpon to Texas.  After winning the Galveston Texas Tarpon Pro/Am in 2004, he took over the running of the tournament in 2006 and expanded it to the Tarpon Tomorrow Texas Tournament Series and now the Project Tarpon Texas Invitational Tournament Series.   In 2008, Scott founded ProjectTarpon.com to bring the information gathered from satellite tagging to the angling public.  In 2009, he coordinated a groundbreaking trip to Nicaragua to satellite tag giant tarpon in the San Juan River, a hundred miles for the ocean.  Scott's uncompromising pursuit of science and education of anglers has given him the opportunity to give numerous presentations to interested civics groups and fishing clubs.   As a founding Director of ITCA, he hopes to leave a tarpon legacy for future generations of tarpon addicts.

Marcus Poffenberger grew up in a family who avidly fished the Texas coast for generations.  His passion for tarpon fishing arose at a very young age when he hooked and jumped a large tarpon while wade fishing for speckled trout near Rockport, Texas.  As a traveling angler, Marcus has fished in the waters of Belize, Hondurus, Panama, Costa Rica, Mexico, Florida Keys, Miami, and Boca Grande.  He calls Port O’Connor, Texas his home port and this is where his boat the LilyBeth landed, satellite tagged and released the largest tarpon (199 lb.+) ever to be PAT tagged.  Marcus Poffenberger is a staple in the research minded tarpon tournaments in Texas, having captained the winning team on numerous occasions: 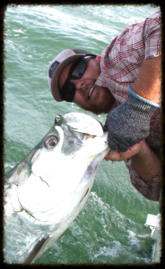